Request to EC for Romanian carnivores 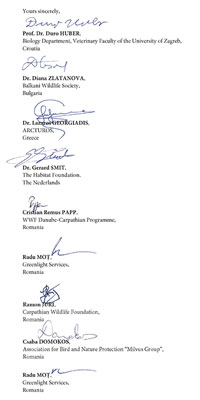 The experts that met in february in Romania to study the possibilities for connectivity measures along the Deva-Lugoj motorway sent a letter to the European Commission urging her to impose proper connectivity mitigation measures for the Lugoj–Deva motorway project. The motorway will intersect an extremely important ecological corridor for large carnivores (and other species) between the Western Carpathians (Apuseni Mountains) and Southern Carpathians. The ecological corridor has already suffered fragmentation due to existing transportation infrastructure and developments.

During the visit of the specialists it appeared that the Environmental Impact Assessment (EIA) that was carried out for the planned motorway does not incorporate the right mitigation measures. Therefore the proposed measures do not ensure ecological connectivity for large carnivores. There are alternatives that are more effective.

Since the European Union is co-financing the proposed motorway she is also responsible for the impact of the motorway on the large carnivores. Moreover, on both sides of the motorway Natura 2000 sites are designated especially for large carnivores. Migration between these sites must be ensured to safeguard the viability of the large carnivore populations in these Natura 2000 sites. It's the duty of both the Romanian government and the European Union to ensure the connectivity between the sites.

A PDF document of the letter can be downloaded here, as well as the memo with detailed information about the problem and the solutions.

Carnivores and infrastructure in Romania