Henk Sierdsema, the co-ordinator of the project 'Bird counts in Bulgaria’ made an overview of the results of four years (2010 until 2013) of bird counts in the Eastern Rhodopes. For every bird species he created a map with the locations where counts were carried out (white and red dots) and where the species was seen or heard (red dots). The size of the dots represents the number of animals per species seen or heard on that spot during a 10 minutes count and within a range of 200 m around the spot. Click here for a PDF file with the maps of all the species. 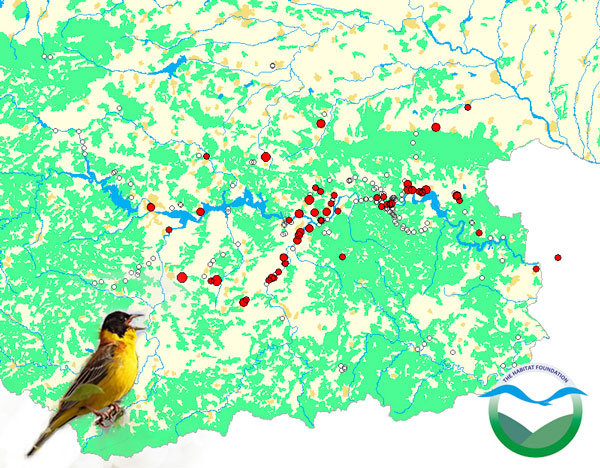 In these four years counts where carried out on 212 spots in the Eastern Rhodopes and 165 bird species were registered. That is 60% of the number of bird species known from this region. That is quite a good result, especially considering that the counts were carried out by tourists as a by-product during their stay in Bulgaria. The results are also a welcome supplement to the 14 transects of the Common Bird Census of the Bulgarian Society for the Protection of Birds in the Eastern Rhodopes and the Bulgarian Atlas of Breeding Birds.

Among these 165 species are 28 species of the Bulgarian Red List of the category 'Threatened' or 'Rare'. On the other hand one can see here big numbers of species that were once common in Western Europe, but are rare now, like Crested Lark, Corn Bunting, European Turtle Dove and Ortolan Bunting.

A nice aspect of these bird counts is that species that were thought by foreign bird watchers to be limited to certain places in Bulgaria are more common than expected. Examples are the Eastern Bonelli's Warbler, the Eastern Rock-nuthatch, the Sombre Tit, the Eastern Black-eared Wheatear, the Subalpine Warbler and the Sardinian Warbler. In other words, it is worth the effort to spend 10 minutes at a spot and look around well. You may see more species than when crisscrossing the country in search of that special spot.

It is clear from the maps that the distribution of the spots is not very homogeneous. The locations of the counts are mainly situated along roads, but there are not many roads in the Eastern Rhodopes. Hence south of Madzharovo and along the border with Greece no counts are carried out yet. It would be nice if the next participants of the counts leave the roads and count birds farther inland.

If you visit the website http://pc.trektellen.nl (this is the website with all the point counts), you will see that counts are not limited to the Eastern Rhodopes. Also on other locations in Bulgaria and even elsewhere in Europe counts are carried out. Of course, the point count method can also be applied anywhere in Europe. It is not tied to one country or region. So, the next time you go for a bird trip to France, Spain or Poland count also some birds on spots using the point count method. The local bird conservation organisation will be very happy with your data.