Henk Sierdsema, the co-ordinator of the project 'Bird counts in Bulgaria’ made an overview of the results of seven years (2010 until 2016) of bird counts in Bulgaria and Macedonia. For every bird species he created a map with the locations where counts were carried out (white and red dots) and where the species was seen or heard (red dots). The size of the dots represents the number of animals per species seen or heard on that spot during a 10 minutes count and within a range of 200 m around the spot. Below a map with results for the Black-headed bunting (Emberiza melanocephala). Click here for a PDF file with the maps of Bulgaria and here for the maps of Macedonia. 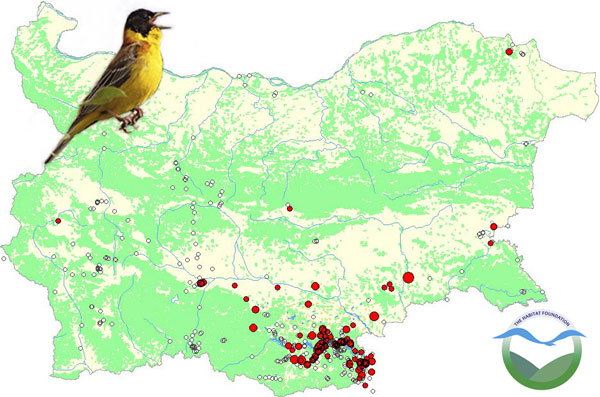 In these seven years counts where carried out on 520 spots in Bulgaria and 237 bird species were registered. That is 59% of the number of bird species known from this region. That is quite a good result, especially considering that the counts were carried out by tourists as a by-product during their stay in Bulgaria. The results are also a welcome supplement to the transects of the Common Bird Census of the Bulgarian Society for the Protection of Birds. In the next figure the red dots are the locations of the transects of the Bulgarian monitoring network in the period 2005-2015.

If you visit the website http://pc.trektellen.nl (this is the website with all the point counts), you will see that counts are not limited to Bulgaria and Macedonia. Also on other locations in Europe counts were carried out. Of course, the point count method can also be applied anywhere in Europe. It is not tied to one country or region. So, the next time you go for a bird trip to France, Spain or Poland count also some birds on spots using the point count method. The local bird conservation organisation will be very happy with your data.

By the way, the data will eventually also be used for the new European Breeding Bird Atlas.